I just wanted to let you all know, I updated the previous posts with pictures. Hope you enjoy!
Posted by Togo at 2:33 PM 1 comment: 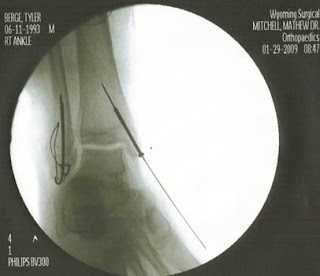 Allan and Allison are racing in Dubois, Wyoming this weekend--my all time favorite race! Unfortunately, I am needed at home to help our oldest and only son who broke his ankle in a wrestling tournament last weekend. Late this week, he had surgery to insert screws and wires to hold it together. This sudden turn of events meant someone had to stay home this weekend to monitor his medication, cart ice packs back and forth, and handle the extra chores. And good grief, since we have so many helpers with the chores, I did not realize how much work all the chores require. We usually have them split between 4 or 5 people, and today there was just me! 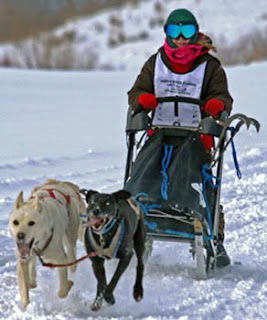 Allison is running her 3-dog Alaskan team in the 3 mile race. She just called with a tall tale of events that occured on her first race day (I am wondering if she is going to take after me with bad race luck). First, she hit a tree, lost her team, hitched a ride with her competitor, caught her team which had turned back and almost went right past her, and then follow a moose into the finish line! Whao! I would be a mess after all that, but at 10 years old, Allison takes it all in stride and is rarin' to get back on the trail tomorrow morning. She is such a trooper! I love that kid. Here is a picture of her in Pindale...those goggles crack me up, they remind me of a giant Fly and she won't leave home without them!

Allan said he had a good run in the 21 mile and said his dogs finished happy and strong. He was a little concerned because we haven't been able to do any running the last 10 days due to the broken ankle fiasco! Hopefully, he will hold it together tomorrow and will pull out a win. He said this particular 21 mile run is a bit steeper than the 15 mile run we traditionally run. In anycase, I wish them both luck tomorrow. As I said earlier, Dubois is my favorite race and the race organizers there are extremely thorough and do such a great job of putting it all together. We would be very sad to see this race ever end.
Posted by Togo at 12:45 PM No comments:

Another grand weekend was pulled off in Wycolo, Wyoming. Just outside of Laramie at about 9300 feet was one of the fastest trails we have ever ran on. The unusually warm Wyoming temps hit nearly 50 degrees F the first day and just slightly cooler the second day. Due to logging we had to split the day by letting the 12 mile classes run their courses before sending out the 18 mile. It did make it a little warmer for what we usually like to race in, but dense forest gave plenty of tree cover for a comfortable run. On the second day the 18 mile class ran the course, then the 12 mile class ran theirs. It actually worked out very well in terms of having plenty of help getting to the starting line!

The trails were well groomed and very fast. Our teams all held together very well. We are always conscientious of shoulder injuries when the trails are so fast, so we were all on our drags quite a bit. Taylor ran the 6 dog 12 miles, with a good clean run the first day and minor leader trouble the second. She ended up winning second place, beat by Leslie Fields who had a SMOKIN' team! Allan and I ran the 10-dog 18 mile race. Allan's alaskan team ran the both days without incident and he claimed first place followed by Ernie Baily, Matt Mauer, and me.

As my luck would have it, I did get off the trail in waist deep snow the first day. I likely lost 10+ minutes trying to get my team turned around. Thank goodness Jolene's husband was close enough by to hear the commotion and came to my rescue. Once we got back on the trail we were off and running without a hitch. I knew the team was running quite well, but was very surprised to catch up with Kayla Corcoran (8-dog 18 mile) and Matt Mauer on the second time around the loop. The next day proved to be an excellent run with the second fastest time.

We stayed with the Corcoran family and Matt Mauer in a plush little cabin at Woods Landing. The evenings were full of tall tales and good friends. Jocie Corcoran brough enough stew to feed an army an it was YUMMY! All and all, the weekend was great success! Next up...Dubois in two weeks.
Posted by Togo at 8:40 AM 2 comments: 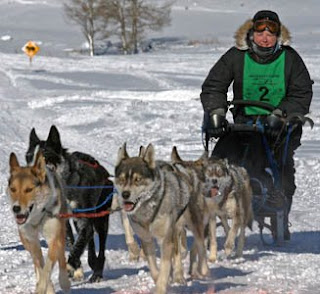 WOW! What a great weekend! We had a ball hanging out with our best sleddog friends and even making a few more! BP and the other sponsors from the Pinedale area sure know how to make a race first class! Really, shouldn't it be mandatory to have a heated tent at all races with free Chilli? I say yes! Did I mention it was 25 degrees below zero on Sunday, actually with the wind factored in, it was actually 40 degrees below...let me tell you that is freakin' cold. The thing about cold days like that (which completely amazes me) is the dogs thrive in those temperatures. I could actually see the smiles on their faces as we headed the start line. I wish I could have smiled, but I was afraid it would freeze that way and my teeth would get cold. I do still have a hard time getting my mind around the fact that once it warmed up to 9 degrees below, I was actually too warm and trying to shed some of my layered clothing...now that just doesn't make sense to me! 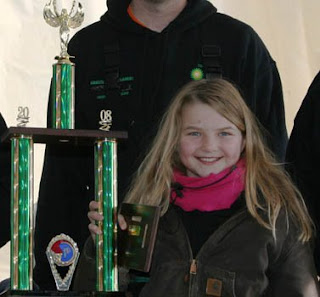 My sweet and beautiful little daughter, Allison (9 yrs old), has talked about getting to run the junior race for months now. She religiously checked the Green River Classic website to see if any new junior mushers had entered (she was the only entry right up until the night before). The really funny thing about it was she did realized I was the webmaster for the site ;-) She was determined to win and that she did. Continental Kennel Club had generously donated $500 so that we could host a junior event. The kids entered a 3-dog max class and ran out 1 mile where a volunteer on a snowmobile help turn them around sending them flying back to the finish line. I think Allison was just as happy to make her new friends, Julia and Katrina, as she was to win the race.

Taylor (13 years old) and I each entered the 6-dog class. I thought it best to split my team up between Taylor and I. She took the front 6 dogs and I took the back 6 dogs (of course that left me with marginal leaders). Taylor is as laid back & easy going as the come. She never gets upset and the dogs respond very well to her for that reason. She was able to pull off two clean runs and as Billy Snodgrass advised her, "don't worry about being fastest, just make no mistakes" So that is exactly how she approached her race. Taylor was able to pull off 7th place. The competition was stiff with some top Alaskan teams and Taylor held her own.

My placing was not as good as Taylor's, I had a little trouble the first day with another team. But that was ok...they ran very well the second day--showing a 22 minute difference in time. My two young dogs tired a little toward the end. I normally would not have taken my youngest dogs, but this race has such wide, flat trails...it was the perfect experience for them. 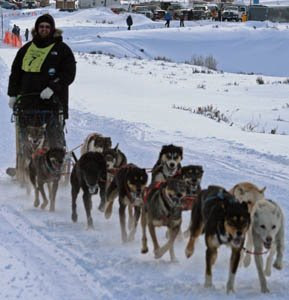 The big news of the weekend was Allan's success. He entered the 12-dog class (28 miles) where he was able to pull out a 3rd place, beaten only by Frank Teasly and Jerry Bath. We were all very proud of him because we know how hard he had worked to train his team this fall. In this year's training he has nearly doubled his training miles. The dogs are in such phenomenal condition and in very high spirits. In a couple weeks, Allan is going to see how he stacks up in Mancos at the San Juan Stage race...GOOD LUCK!

Deer Creek sends major THANKS to all the volunteers and fellow mushers for their part in a great weekend!

First race of the season

So here we are in Pinedale, Wyoming waiting to run the Green River Classic. This should be an interesting race for me. I have a new sled that has probably more power steering than I am use to and it is the first snow run of the season (ok, really second, but I don't count last weeks disaster--there is literally no snow on Casper Mountain--it really was more of a dirt run on runners...eeek!). Not fun!

This race is a lot of fun, we get a well rounded group of professionals, weekend warriors, and recrational mushers. Matt and TJ even drove up in the hurricane strength winds (what they don't know is it is always hurricane strength winds in Wyoming). I've entered the 6-dog class and Allan has entered the 12-dog class. I usually don't have enough miles on the dogs to run the 12-dog class this early in the season, but Allan has worked very, very hard and is sitting at nearly 700 training miles.

Part of the difference in our training miles is due to the difference in the dogs. His Alaskans are not nearly as bothered by warmer temperatures and he is able to get earlier training in. Where as my Seppalas really don't do well much over 50 degrees, so I am nearly a month behind him in trying to get consistant runs on my team. We were still waking up to 60 degree mornings in mid November! We getting there!

We'll try to update on how the race went on Sunday...
Posted by Togo at 9:47 PM No comments:

We are so excited that the new year is here. The last few months at Deer Creek have been a whirl-wind of projects, training, working, and living. Of our long list of projects, updating the website continually sits on my mind. I very much enjoy working the websites, but time is never on my side. So we thought a great way to share our kennel was to get the blog up and running.

We are so excited about our dogs, how we are progressing and this sport in general we can't wait to share! We hope that this venue will provide an easy way to share antidotes, philosphy, general mushing information and keep up with current news in our kennel and in the Seppala world.

We wish you a Happy New Year!
The Berge Family
Deer Creek Kennels
Posted by Togo at 10:37 PM No comments: